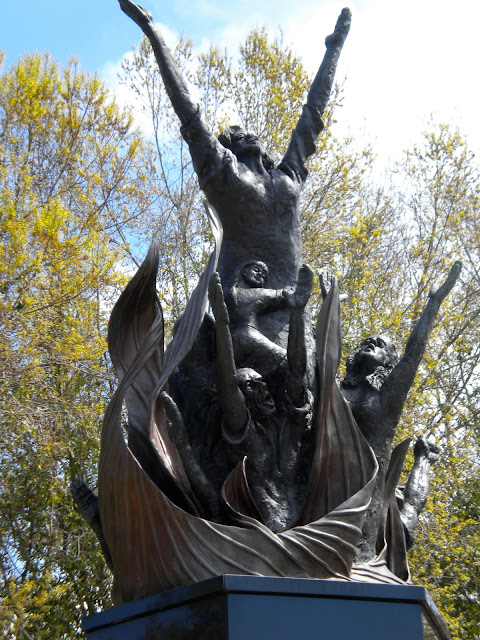 It has been six years since I prayed "the dangerous prayer" and hurled my deepest desire for my family to know God fully, into the lap of God. I wanted them to know his complete character and personality  experientially through relationship, intuition and intellect.
The lap of God became the threshhold of an open door and we stepped through. Our older son, Kyle and his wife, Michelle, carried a seemingly bottomless bag of suffering and sorrow from the streets of Kolkata, India upon which to build their family.  Sixteen months later they brought home from those streets their newly adopted daughter, who has displayed so many consequences of early childhood trauma and neglect in her brain, body, and emotions, and whose nurturance has cost so much energy, money, and sacrifice and has given pain, loss, and wisdom in return.

Our younger son, Sam, walked through waves of physical and relational pain, and David and I drank at our own well of sorrow and grief.  We watched as our fathers' strength left them and our mothers exchanged freedom of movement and activity for a new loneliness as they nursed their husbands' bodies and felt their lifelong partnership slip through their fingers.  We struggled with the smallness of our service and support for them.

During a two year span in the midst of these sorrows, I experienced the abrupt death or removal of five of the closest friendships, ministry partnerships and mentoring relationships of my life, apart from my family.  During this same time David had to adjust to the sudden death of two of his closest friends, who died on an airstrip far from home.

David and I  faced "new and improved" versions of old marital conflicts, wounds, and disappointments as we tried to navigate working together on a full-time basis once again.  That had always been challenging for the two of us, with our poor communication skills and our opposite approaches to seeing, prioritizing, and tackling challenges.  But when we threw in my chaotic hormonal changes with its toll on my sleep and psyche,  and the physical and emotional consequences of David's many years of deferred stress into the mix, living and working together with mutual respect and joy in our relationship seemed an impossible dream.

In addition to the sorrow my family experienced first hand, after we returned from Kolkata, I felt strongly compelled to immerse myself in and "borrow" the suffering of the world, through books, documentaries, and movies narrating and portraying biographical accounts of incredible loss and suffering. For months I swam in the river of other's sorrow, read biblical passages of lament,  and inwardly disdained an American evangelical narcissistic consumer culture of which I had been an enthusiastic member.

This culture seemed to prefer that the suffering of others stay hidden from view, shut away in institutions or faraway lands, displayed only in brief snatches of print, video and song.  Many of us viewed outbreaks of suffering as a condition to be avoided at all costs.

I didn't like suffering.  I knew Bible passages that referred to suffering as a normal human condition and spoke of benefits that came from suffering, but I didn't have an ascetic's glorified view.   Secretly, I hoped that suffering was not inevitable.  For most of my adult life I hoped to avoid "unnecessary" suffering by obedience to principles of living I saw in the Bible and by appealing to God for protection.  I didn't want to get too close to people who suffered in ways that seemed so far behond my coping ability.   I wanted no part of it.  Until I wanted an intimacy with God that couldn't be had without unlocking that door.

So my family's increased experience of suffering after my "heart's desire prayer" didn't take me by surprise, but my increasing inability to trust in and frame it within the Christian story on which I'd built my life did.  Thoroughly.  Within 18 months of completing the in-depth Bible study which caused me to fling my deepest desire onto God's lap, I was unable to finish a Bible study about believing God because I realized I no longer did.

I could no longer trust that God cared about the details of our lives to intervene and come to our rescue when we cried out in pain, because He had, by my thinking, abandoned millions of children around the globe to exactly that perspective.  And if he abandoned those children to conclusions one would come to naturally, how could I come to a supernatural conclusion and think that my vastly different life circumstances came because I and my parents before me trusted in God's goodness; and not because I was born in a country that had abundant natural resources and oceans surrounding it to insulate and protect its members;  and not because I had been born to parents who spent their lives providing for, protecting, loving and nurturing their children?

With that trust in God's great willingness to intervene gone, suffering that might serve a redemptive purpose lost its place at my table.   Myriad examples of suffering caused by man's pride, selfishness, covetousness, anger, and injury to one another seemed simply senseless to me.

I fell back into the ancient conundrum of trying to reconcile a God who is all good AND all powerful yet allows suffering on the massive scale we see and experience in our world.  That our suffering is caused by sin was no longer enough explanation for me.  That God was patient, waiting, while many suffered, so that some could come to new life in him, was no longer enough for me.   I wondered if my four decades of certainty about the joy and fruitfulness of an intimate relationship with the God of the Bible had been simply self delusion.

I kept up the process of internal questioning, reading outside the traditional Christian world view and trying to see where reason and logical thinking would take me in my quest even though I felt little hope I would arrive at an answer to the riddle that would satisfy me and other wounded skeptics.  After all, centuries of far better thinkers than I had been denied.  I strongly suspected that sooner or later I would simply have to choose what I would build my life on, because I didn't read anyone who hadn't at some point in their reasoning, based deductions on some assumption that had to be believed rather than proven.


Eventually I grew tired of fighting, tired of living with more fear and less hope, tired of the nihilism that moves in when faith in a God of love walks out.

Gradually, over a period of several years I've worked my way back to some foundation of belief.    I reduced my stress load by exchanging most of my responsibilities in our family business for increased childcare and cooking responsibilities.  I started walking, running and biking regularly again and I began to lift weights for the first time in my life.  As a result, my sleeping and my sense of emotional well-being greatly improved.  Together, these actions gave me more time, energy and ability to reason effectively, and I began to heal from the outside, in.

Slowly I began to choose to believe, (some days, then many days, then most days) that "GOD IS", then that "GOD IS GOOD", then "GOD IS LOVE" and finally that "JESUS SHOWS ME WHAT GOD IS LIKE", what love would look like if love were a man.

The character of Jesus, as displayed in the gospel accounts, was very compelling to me,  but also compelling was the commonly acknowledged prophetic picture of Jesus as the "man of sorrows, acquainted with grief", the one "from whom we hide our faces" described by Isaiah hundred of years before Jesus' birth in Isaiah 53 which I had memorized years before.

"GOD, How can you make it so exceedingly difficult for people who suffer greatly from abuse, extreme poverty, oppression and hatred passed from generation to generation to find a way out of fate and into freedom?  I cannot bear to think about this suffering for more than a few months.   How can you bear this hate and destruction continuing year after year and generation after generation?  How can LOVE not move to end it?"

All these agonized questions slowly settled on the picture of Jesus, the suffering servant, the  son of God, bearing our sorrows, our sins, our sicknesses, our suffering on the cross.

The crosses generally worn and displayed by Protestants in the U.S. are "empty" crosses, with the body of Jesus removed and the focus of the resurrection:  "Christ has won!  Christ has power over death!  Christ has new life for me!"  But the crosses displayed and worn by Catholics often are a crucifix, depicting Jesus' body nailed to the cross, with a focus on the suffering Jesus, the Jesus who bears in his body the sin and sorrow of the world, the sin and suffering of every man, every woman, every child.

"Jesus Christ...the same yesterday, today and forever... bore our sins in his body on the tree....He was despised and rejected by men, a man of sorrows, and familiar with suffering...Surely he took up our infirmities and carried our sorrows...Yet it was the LORD's will to crush him and cause him to suffer...After the suffering of his soul, he will see the light of life and be satisfied; by his knowledge my righteous servant will justify many, and he will bear their iniquities...he bore the sin of many, and made intercession for the transgressors."

This Jesus, the one one who was despised and rejected, this Jesus who shows me the heart of the eternally present-tense "I AM", this Jesus who suffers when others suffer...who feels our pain and weeps with us over death and destruction has been sitting shiva with me during these years, sitting beside me, waiting for the quiet space that comes after a paroxysm of mourning, waiting to lift my chin so I might look into his eyes - a man of sorrow, acquainted with grief.

Now, six years after the prayer,  I know this man of sorrows, acquainted with grief, in a way I did not know him before the prayer, before these years....I know him from inside his overwhelming, love-driven sorrow... the sorrow his eyes reflect because he experiences our pain with us.


Note:  Pictured above is a wonderful holocaust memorial statue at Temple B'Nai Israel in Clearwater, FL.