Isaac participated in his second triathlon for kids this past weekend.  You'll find photos and story here.

The waves of racers start with the oldest kids (13-15 year olds) and finishes with the 5-6 year old group.  Who can watch small riders pedaling out onto the bike course with training wheels and not smile?

After 5 or 6 of the training wheel riders had passed me, I turned back to see 2 more boys with training wheels, separated by at least 40 feet and going almost exactly the same speed.  The second boy remembered the "bike passing etiquette" instructions they'd all been given at the start of the race and called out loudly "PASSING ON YOUR LEFT!"

He tried so hard to overtake the rider ahead of him that he took the turn too fast for his training wheels and balance and he lost it.....but quickly hopped back on and headed out.  I would love to have heard his version of the story to his parents after the race. :-)

Good times for spectators at Seminole's Tri If You Dare triathlon for kids.  A few parents get a little INTENSE in their coaching, but mostly it's kids looking like they're enjoying the challenge and the fun of competition.

Check out The Fitness Torch for a classic runner's duel photo from this race. 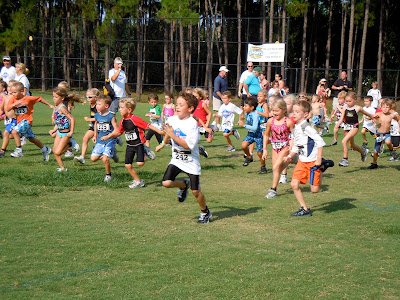 Connecting the Dots From Guilt to Freedom

I've had lots of conversations with various people, over the years, about the life-changing dynamic of forgiveness, but two, in particular, have been on my mind in recent days.

About thirty years ago David and I shared a dinner table with a couple who were strangers to us in a darkened theatre for a community musical production.  The older man across the table found a statement I'd just made about being forgiven for my crimes against God hard to believe:  "Surely you don't expect me to believe that you have sinned? - a sweet, young woman like yourself can't have done anything bad enough yet to qualify as sin."  I insisted that indeed I had, and named a few of my actions which I considered to be transgressions.  He remained unconvinced that I had committed anything so seriously wrong to qualify as sin, and I was surprised that he reserved the label of "sinner" for people who committed murder and other "serious offenses". . .  Clearly, we had different definitions of sin and guilt.

Flash forward three decades to a conversation with a friend who was preparing to divorce her husband.   I asked her a question to gauge her awareness of her own possible contributions to the destruction of their union.  She was in her forties, and I figured she was plenty old enough and had been married long enough to have realized how some of her own actions, attitudes, and inadequacies - not just her husband's transgressions - might have also pushed the two of them to move from lovers to adversaries.  She seemed shocked that I would ask such a question, replied "I haven't done anything", proceeded to recount "the short list" of her virtues stacked alongside her husband's offenses, then repeated her declaration of personal innocence.

I knew I'd been a VERY slow learner in acknowledging my own contributions to our conflicts, but surely by age forty I'd been able to own some blame for our conflicts - hadn't I?  Well, to be honest.....careful scrutiny of my memory bank made me admit and grieve that I had wasted DECADES looking at my actions and and attitudes in our marriage through lenses of self-interest, self-protection and self-righteousness.  I had (and alas, still have) an incredibly strong knee-jerk reaction to criticism or correction instead of listening, with an open, teachable heart to the person who is criticizing  or correcting me.   I'm working on it, I've made some improvement, but still, I have a long way to go.

That conversation with my friend reminded me what a gift it is to be able to see my failures and inadequacies in loving my husband - or any other another person in my life - from their perspective, and what a gift it is to be able to own guilt in wrong-doing.   Because having both a clear awareness of my own transgressions and also clear memories of having been forgiven myself, help move me to WANT to forgive my husband's (or another person's) transgressions against me.  In fact, the connection between receiving forgiveness myself and offering it to another has been so strong in my own life that I wonder if a person is able to give true, full forgiveness  to another person and experience the resulting freedom WITHOUT the awareness of having been forgiven transgressions oneself.

Amber has posted a great article about how to apply this dynamic of forgiveness in your own life.  Find it here.
Posted by Sandy at 9:22 PM 1 comment: