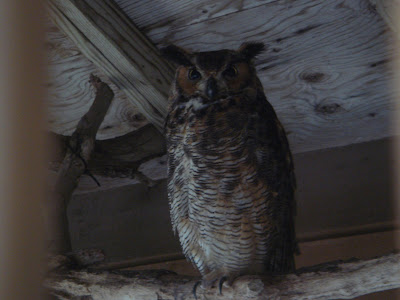 Like Michelle, who meme'd me, and Sam, I wondered how the phrase "meme'd" originated. I decided that the phrase is simply a repetition of "me", and that the originator of the chain is either spoofing the self-focus of much of the blog world, or has a research interest or financial stake in the blogosphere.
SO....in the spirit of honoring Michelle's effort to inject a little fun into our daily stresses....
1. I am an extremely SERIOUS person - according to the male members of my family. I routinely answer questions that were meant to be a rhetorical joke as if they were a straight question. I prefer to think of myself as a "contemplative intuitive" but the truth is by the average person's measure, I spend waaaay too much time imagining and evaluating potential words, choices and actions.
2. By the standards of today's production-oriented western world, I am incredibly NON productive. Mostly because of fact #1. I currently have two non-working clocks (dead batteries) on my bedside nightstand. I have tried on several occasions to think of anything I can do fast, and the only thing I came up with (after much thought) was JUDGING OTHERS. Now there's a skill you want to be sure to include on your resume.
3. I have written hundreds of notes, letters, e-mails, articles and blog posts in my head over the years while walking, running, sitting in bed that never materialized even in cyber space.
4. The best gag gift I've ever received was from my husband's sister who was my best friend for several years: She gave me a pile of fabric pieces, pinned to pattern pieces and cut out, ready for sewing, which I had given to her several years prior, in exactly the same condition. The perfect statement about my project completion record.
5. I paid good money to see to my first body-building show a couple weeks ago. Truly. To support and encourage a young friend who was competing for the first time in figure and fitness categories. I missed her first appearance on stage and sat through 1.5 hours of male body builders strutting their stuff on stage. I was not bored. They seemed, somehow, vulnerable, almost fragile, to me......how much of their self esteem was wrapped up in the arbitrary assessments of the judges?.....I think I'll ask my mom to go with me to the next show - it'll be a good time.
6. It does me no good to try to lie. I have been told this on more than one occasion. Apparently I have "an open-book face. One time, years ago, I lied to a bank teller in the drive-thru, asserting that my husband, not me, had penned his signature on the back of his pay check which I was depositing. My very loud conscience DEMANDED I confess to the teller the following week. She said she knew I had lied.
This scrupulous attention to truth-telling is my parents' doing. Case in point: Age 5 (or thereabouts) I used my mother's lipstick to doodle and write "tan" on the bathroom mirror. Like any 5 year old trying to evade a spanking, when asked directly if I wrote on the mirror with my mother's lipstick, I directly denied it. I got spanked, not for using the lipstick in said manner, but for lying about it.
For a while I was convinced that my mother did indeed have eyes in the back of her head and would know whenever I transgressed, because I couldn't figure out how she knew it was me, when I had an older sister as well as a foster sister and brother living with us at the time. It took my young brain a while to realize that I had given myself away by writing one of the only two words I knew how to write.
7. It takes me 400 words to say what most people say in about 50-75 words. Or don't say at all. During one period of my life I routinely spent hours -HOURS and sometimes DAYS - writing e-mail missives that would - at the very best - receive a quick scan before deletion by the recipient. David has nicknamed me "the amplified version" and loves to recount how he would watch our teenage/young adult sons pushing the index finger of one hand into the open palm of their other hand while they listened to me talk, waiting for me to GET TO THE POINT.
David has emphasized his need for me to pre-edit my speech so often, that sometimes now when he asks me question, for the good of our relationship, I reply "I can't answer that without free-floating." This has got me thinking about writing an article called "pearls before swine"...
About 8-10 years ago Sam gently instructed me that when talking to the male species, I should preface my comments with one short sentence stating the subject of my remarks to follow - kind of like the subject line of an e-mail. Very good advice. If I could only remember to follow it. Which leads me to #8...my memory....

The Meme'd Rules:
1. Link to your tagger and post these rules on your blog.
2. Share 7 facts about yourself on your blog, some random, some weird.
3. Tag 7 people at the end of your post by leaving their names as well as links to their blogs.
4. Let them know they are tagged by leaving a comment on their blog.
I hereby tag Robin who is so much younger than me that you probably have lots of little eccentricities I know nothing of (I'll leave Heather for you to meme) and Joanna - as long as responding to the meme doesn't keep you from posting your poetry and prose - perhaps you could just list some of the things you've already told me because you know I've forgotten them.
I would like to meme Mom, Susan & Jim, Bruce & Angie, Amber, Meagan, Jonathan & Kelsey in the interest of hearing some good stories and new-to-me tidbits, but since I don't know your blog URLs (if you have them), I have set up a family blog to which you can all post.


The photo of this owl is one of many photos I've taken at Suncoast Seabird Sanctuary, Redington Beach/Shores, Florida

Please write more often. I have sat here and laughed until I cried. I made the comment to Sam that it is time to visit Florida, so I can get some good laughs for two to three days in a row. Thanks Sandy.

I'm glad you enjoyed it - I smiled alot writing it - this one was quick - only took me two days (3-4 hours tops to write!)

David, Kyle, Sam, & I have remarked a number of times about how useful David and I will be the older we get as our hearing (read MY) and brain connections disintegrate more, making our normally chaotic attempts at communication even more hilarious.